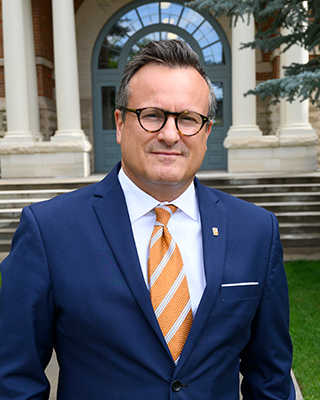 Bradley J. Cook is the President of Snow College and Professor of History. He is an alum of Snow and a native of central Utah.

Prior to his current position he served for 10 years as Provost and Executive Vice President at Southern Utah University. While at SUU he worked to elevate SUU’s academic reputation as a premier public regional university and advanced an ambitious agenda of internationalizing the university.

As a student, Dr. Cook completed with honors a bachelor’s and master’s degree at Stanford University, where he also started as a cornerback for Stanford’s football team. As a Rotary Ambassadorial Fellow, he received a doctoral degree in Middle East Studies from the University of Oxford in Great Britain.

He is also the author of the book, Classical Foundations of Islamic Educational Thought, published by Brigham Young University Press. He has special research interests in Islamic educational theory, comparative religion and international and comparative education. Dr. Cook is active in his academic field, maintaining a consistent research and publication agenda. His publications can be found in a wide variety of academic journals.