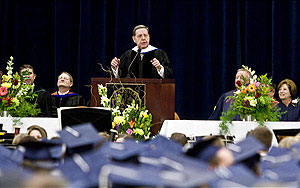 Elder Holland of The Church of Jesus Christ of Latter-day Saints' Quorum of the Twelve received an honorary doctorate of humane letters prior to giving the commencement address to 755 graduates at the junior college in central Utah.

In his address, Elder Holland explained that Wolsey rose to political prominence and worldly wealth in the court of King Henry VIII. But when he couldn't overcome church objections and deliver a divorce for his king, he lost everything, ultimately falling ill and dying on his way to execution.

"What a tragic end to such a gifted beginning," Elder Holland said. "What a pathetic farewell to a life that held such promise, as yours does. … And where did it go wrong? It went wrong when ambition became more important that conviction; when corruption transcended fidelity; when power and wealth created a thirst that honest living could not satisfy."

He told the graduates, acknowledging they are facing tough global economic times, to avoid making the same mistakes by turning to "the permanent things, the reliable things forever. Truth and industry and love. Family and friends. Humility and sacrifice and faith."

Elder Holland then recited from Kipling's "Recessional," written at the height of the British Empire, including the words: "Lest we forget — lest we forget."

He exhorted the graduates "to remember again what so many have sacrificed and done for you in order that you could be here today," including parents, family, faculty, friends and for some, spouses and children.

"Promise to remember Snow College, its wonderful traditions, and the people who made all this possible for you today. And when you do remember, be grateful," he said.

Elder Holland then turned to a sermon delivered by Donne affirming that God "had made no decrees to distinguish the seasons of his mercies, especially during times of discouragement."

Then he told the graduates, "Above all else you have learned here, may you leave this great school secure in the promise of God's unfailing love for you."