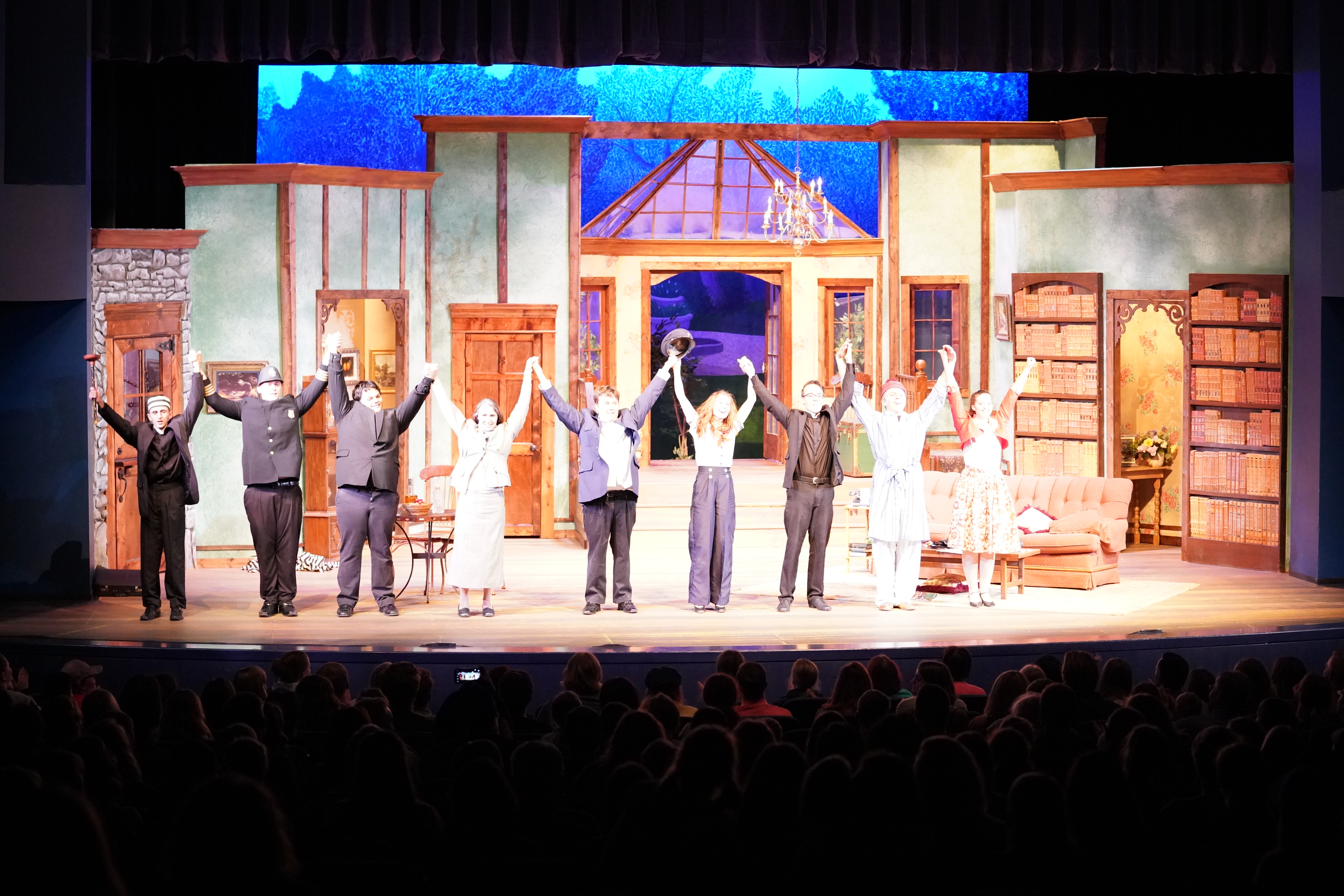 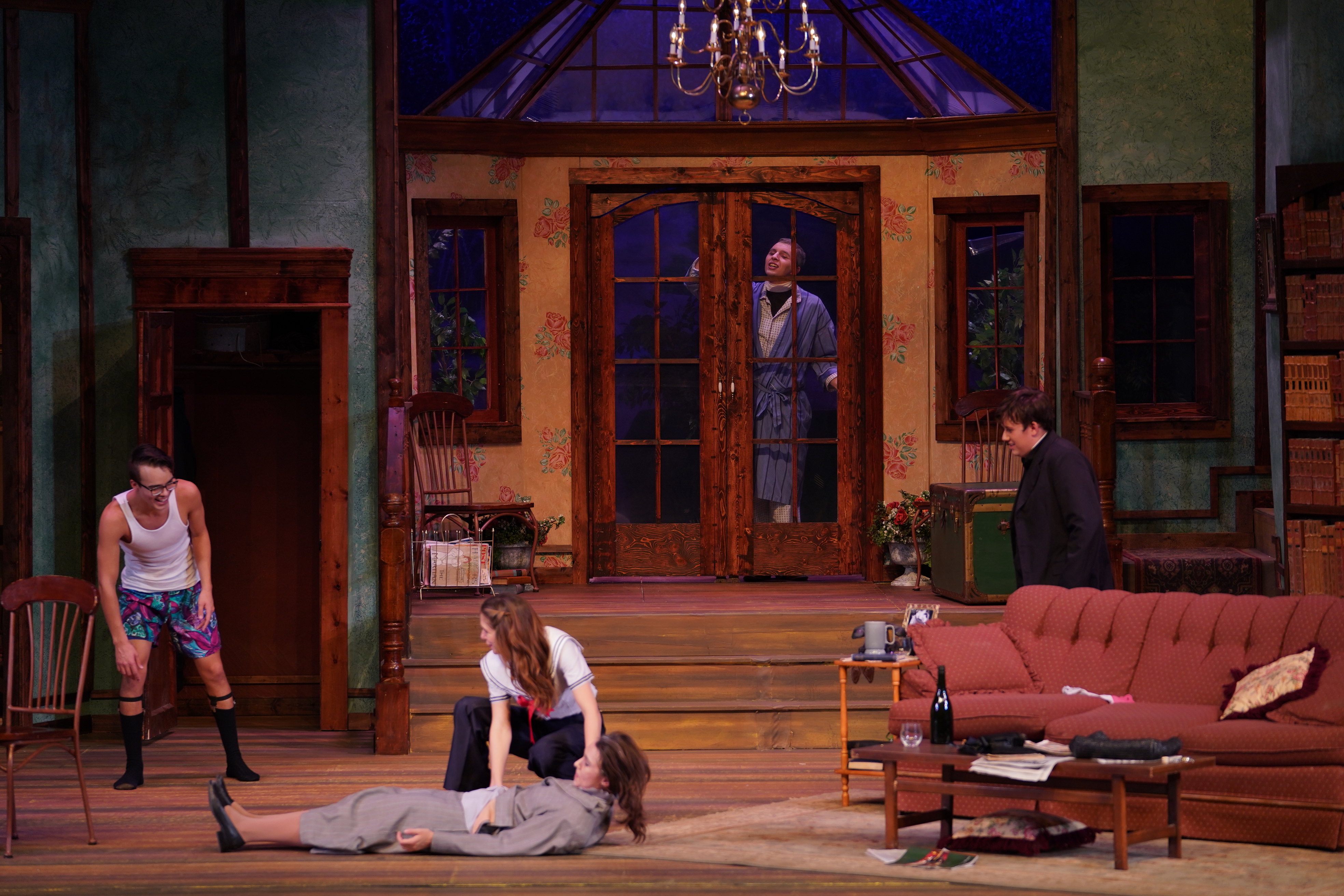 Snow College Theatre produces two mainstage productions each semester for a total of four productions each year. The plays selected are chosen to give our theatre students exposure to a variety of dramatic genres as performers and technicians, and to educate and entertain our audiences. In addition to our mainstage productions we present a secondary Black-Box Series each Spring Semester of scenes and plays directed and performed by advanced theatre students.

So swift is the action, so involved the situations, so rib-tickling the plot in this London hit that at its finish audiences are left as exhausted from laughter as though they had run a foot race. Galloping in and out of the four doors of an English vicarage are an American actor and actress (he is now stationed with the Air Force in England), a cockney maid who has seen too many American movies, an old maid who "touches alcohol for the first time in her life," four men in clergyman suits presenting the problem of which is which (for disguised as one is an escaped prisoner), and a sedate Bishop aghast at all these goings-on and the trumped up stories they tell him.

This is the splendidly witty drawing room comedy that gave the world the immortal Mrs. Malaprop.

In The Rivals, Lydia Languish reads too many romance novels. She wants to marry penniless ensign Beverley, but doesn't realize that in fact he is the wealthy Jack Absolute. Though she initially refuses to marry him, she later changes her mind.  Lydia's aunt Lady Malaprop doesn't approve of Lydia's suitor Beverley, because he's poor. Lady Malaprop has fallen in love with Sir Lucius O'Toole, who mistakenly believes that the love letters he receives from her are actually from Lydia.  It turns out that ensign Beverley is in fact Captain Jack Absolute, the son of the wealthy Sir Anthony Absolute. He has been pretending to be poor because he knows that Lydia has a romantic idea about marrying a poor man from a lower social station.  Unbeknownst to Jack and Lydia, his father and Lady Malaprop have arranged for them to be married. Upon realizing that Jack isn't poor, Lydia wants nothing to do with him, then changes her mind when she hears that he has gallantly entered a duel.

A timeless classic, Michael McLean's The Forgotten Carols have been enjoyed by sold-out audiences nationwide. Now you can feel the warmth of the Christmas spirit from the stage performances in your own home. The Forgotten Carols tells the story of a nurse whose empty life is changed when a new patient recounts the story of Christ's birth as told by little known characters in the nativity story. The accounts from the Innkeeper, the Shepherd and others help her discover what the world has forgotten about Christmas, and open her heart to the joy of this special season.

James Lapine and Stephen Sondheim take everyone's favorite storybook characters and bring them together for a timeless, yet relevant, piece... and a rare modern classic. The Tony Award-winning book and score are both enchanting and touching.

The story follows a Baker and his wife, who wish to have a child; Cinderella, who wishes to attend the King's Festival; and Jack, who wishes his cow would give milk. When the Baker and his wife learn that they cannot have a child because of a Witch's curse, the two set off on a journey to break the curse. Everyone's wish is granted, but the consequences of their actions return to haunt them later with disastrous results.

A young orphan and his mates are shipped off from Victorian England to a distant island ruled by the evil King Zarboff. They know nothing of the mysterious trunk in the captain’s cabin, which contains a precious, otherworldly cargo. At sea, the boys are discovered by a precocious young girl named Molly, a Starcatcher-in-training who realizes that the trunk’s precious cargo is starstuff, a celestial substance so powerful that it must never fall into the wrong hands. When the ship is taken over by pirates – led by the fearsome Black Stache, a villain determined to claim the trunk and its treasure for his own – the journey quickly becomes a thrilling adventure.