The Snow College cheer team put together perfect performances to win the USA Collegiate National Championships in Anaheim, Calif., marking the first-ever national title for the Badgers. Snow competed against 50 other teams in the Two-Year College division and advanced to Sunday's finals following a perfect performance in the preliminary round. The cheer squad—made up of 12 women and four men—put together another perfect performance to defeat Mt. San Antonio College, North Idaho College and USU Eastern in the finals.

"We had to overcome a few challenges just to even make it to Anaheim, but it was such an amazing experience," head coach Kaylie Bailey said. "I couldn't be more pleased with the way this team came together and put together two perfect performances. It was just so amazing."

After waiting in the Provo airport for 10 hours, the team's flight was finally canceled, leaving Coach Bailey scrambling to find a way to Anaheim for the competition the next day. After securing rental vans from around Utah County, the team drove through the night, arriving in Anaheim at 4 a.m. on the day of the competition. In addition, one of the team members suffered a broken ankle three days prior to the competition, forcing the team to alter their routine.

"We definitely had some challenges leading up to the championships, but this team came together and worked really hard to overcome a difficult situation," Bailey said. "I am just really proud of them. A lot of the other teams couldn't even believe we were able to make it to the competition after our flight was canceled. They were all so complimentary of our team, the sportsmanship that was displayed, and the way these kids performed the entire weekend. It was just really amazing."

Teams were judged on their routines that included stunting, dance and tumbling. Teams received scores based on point deductions for errors in their routines. The Badgers did not receive a single deduction during the two-day event, posting perfect scores in the prelims and in the finals. 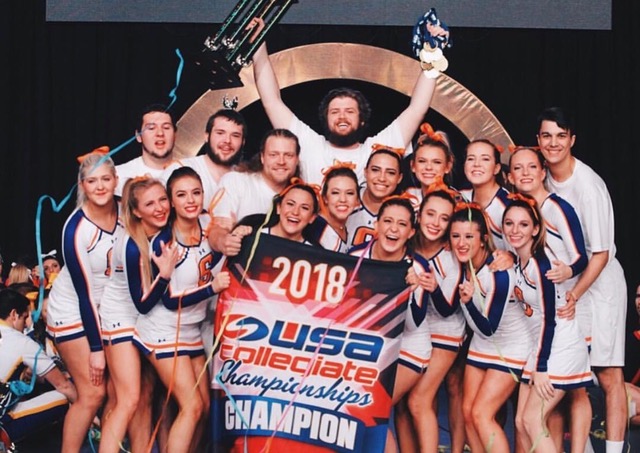