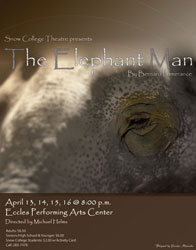 The true story of John Merrick; a man whose body is hideously deformed, but within is a remarkably sensitive and intelligent being. Merrick is exploited by Victorian society and philanthropy. He is befriended by an ambitious and brilliant young surgeon who looks after him in his last few years—finding him a home in a London hospital where the lovable freak's presence is shrewdly used for fund-raising. Merrick is introduced to high society, becoming dependent on the success his deformity brings him. A well-known actress tries to ease his loneliness, but her efforts are thwarted by hypocrisy. Even those who love him can't help him and ultimately he dies from his horrible affliction.