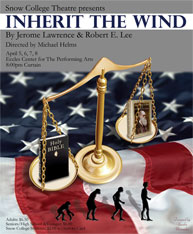 In the blistering hot summer of 1925, two nationally-known legal minds, Clarence Darrow and William Jennings Bryan, battled in a tiny courtroom in Dayton, Tennessee, and, for a time, captured the attention of the world. The issue? A state law that forbid the teaching of evolution and a local teacher's violation of that law. The official name of this encounter was Tennessee vs. John Thomas Scopes, but it became known the world over as the Scopes "Monkey Trial."

Thirty years later, in 1955, playwrights Jerome Lawrence and Robert E. Lee published their dramatized version of the events of the summer of 1925. In a brief note at the beginning of the play, the playwrights admit that the Scopes Monkey Trial was clearly the inspiration for their work. But, the authors emphasize "Inherit the Wind is not history" and that the "collision of Bryan and Darrow at Dayton was dramatic, but... not drama."

Bringing history to life through drama involves a risk that the central issues will be seen as "of the past" and of no relevance to the present. Inherit the Wind, however, has thrived for over three decades, suggesting an attraction for theater-goers far greater than that of a quaint look at America's past. As people search for meaning in an increasingly complex world, the different belief systems that attempt to provide some kind of nderstanding can, and do, come into conflict. Whether these systems wear such labels as religion, science, or politics, the struggles that exist within and between them is reflective of a cultural conflict that has yet to be, and may never be, resolved. Inherit the Wind then, is far more than the story of twelve exciting days in a Tennessee courtroom; it is a narrative of a nation and its people as they struggle to come to grips with the forces of change.