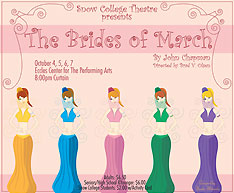 "Tony Scudamore, who did his wartime service with the British Army in North Africa, has settled into a peacetime career with the Foreign Office. Tony displays almost a bit too much British reserve for his American wife, Sally, as does his older brother, Ken, on leave from his tea plantation in the tropics, and when Jack Krasner, a friend from the States, arrives unexpectedly she jumps at his invitation for an evening on the town in London. Tony and Ken are not won over so easily, particularly as the senior Scudamores (he's also in the Foreign Office) have suggested a family dinner for the evening. So the upshot is that Sally and her old beau go one way, while Tony and Ken go another. Nobody stops to think much about a certain letter which arrived that morning informing Tony that he has been remembered in the will of an Arab sheik whose life he saved during the war. By the end of the evening the fog is too thick for Sally to get home, but Tony and Ken make it, and so does Haroun El Bahn (the sheik's emissary) bearing Tony's legacy--five nubile, Arab maidens. Tony's first reaction is to send his "harem" back, but it seems that to refuse a dying sheik's bequest is a mortal offense. Tony's father also brings up the touchy point that the British government is now negotiating oil leases with the dead sheik's successor--and any dispute could lead to unhappy complications. This is the situation which Sally walks into the next morning, and the misunderstandings which follow are hilarious."