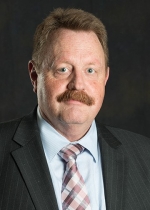 Vance Larsen has served as both Director of the Horne School of Music, and Dean of Fine Arts Division at Snow College

What are your hobbies?

My wife and I enjoy traveling & scuba diving. I enjoy reading -- especially history -- and amateur astronomy.

How did Snow College contribute to your accomplishments?

Some of my first musical memories are of McLoyd Ericksen's Badger Pep Band at basketball games in the old gymnasium. As a young person, I attended many concerts and theatrical productions at Snow. I was fortunate as a Snow College student to have both McLoyd Ericksen and Wayne Erickson as mentors. While attending a band camp at Snow when I was 13, McLoyd noticed that my music sight-reading skills were wanting. He mentioned this to my mother (who worked as Secretary to the President) and they arranged for percussion lessons with McLoyd to remedy this problem. McLoyd also gave me an opportunity to play in the Snow College Jazz Band during my junior and senior years at Manti High School.

Returning to Snow after my LDS mission, I was determined to pursue a more "practical career path." Wayne Erickson intervened and I stayed with music. I am grateful to both McLoyd and Wayne for seeing in me potential, pointing me in the right direction, and always being there to answer questions as my career progressed.

What is your most memorable moment at Snow College?

I met my wife Lorna when she asked me to dance at a school stomp. She informed me that she was a Student Body Social Vice President and that "she was in charge of my social life." I believed her.

What was your professional path from student at Snow to working at Snow?

After Snow, we transferred to Utah State University where my wife and I completed our bachelors degrees. Our first jobs after USU were in Delta, Utah, where I taught band in the middle school and high school, and Lorna taught elementary special education. After a year in Delta, we accepted jobs in the South Sanpete School District. I taught at Ephraim Middle School and Manti High School for four years where I increased the size of the band from 30 to 90 players. The MHS band placed first in the 2A division of the State Concert Band Festival in 1988 and 1989. I was then hired as the band director at Snow College. I completed my MM and PhD degrees in music while working at Snow.

What additional information would you like other alums to know about you?

I retired after serving 26 years in the Army National Guard as a Field Artillery officer. My last assignment was Commander of the 2nd Battalion, 222 Field Artillery. I have performed for over 20 years as a member of the Snow College faculty classic rock band, the "Phat Old Proffessors." As a songwriter, guitarist and singer, I have released an album of original songs under the band name, "Uncle Boaz." My wife, Lorna and I are the parents of 4 wonderful children and 5 grandchildren. I have enjoyed everything I have done in my career, but being a grandfather is the best job I have ever had.

What advice would you give current Snow College students?

Never argue for your limitations -- a soon as you do, they will be yours. If you have vision, persistence is probably the most important factor in success.

If you would like to be highlighted, or know someone who would, please contact the Advancement Office by phone: 435-283-7062 or email: