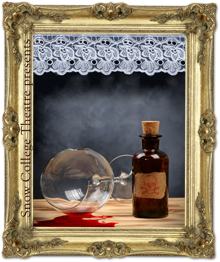 A delightful combination of the farcical and the macabre, we are “charmed” by two elderly sisters who are famous in their Brooklyn neighborhood for their numerous acts of charity. Unfortunately, however, their charity includes poisoning lonely old men who come to their home looking for lodging. The two women are assisted in their crimes by their mentally challenged nephew who believes he is Teddy Roosevelt and who frequently blasts a bugle and yells "charge" as he bounds up the stairs. Matters get complicated when a second nephew, a theater critic, discovers the murders and a third nephew appears after having just escaped from a mental institution. In his adroit mixture of comedy and mayhem, Kesselring satirizes the charitable impulse as he pokes fun at the conventions of the theater.