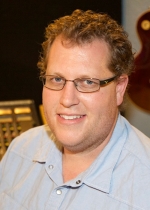 Ben Harris is both an accomplished music industry professional and an educator.

As a professional in the audio and music industry, he has had his compositions licensed for TV and Commercials around the world (including ‘Donny Loves Jenny’ and 'Hollywood Medium’), recorded and produced projects for hundreds of clients, and received a Grammy Certificate for his work as an assistant engineer on the 2009 New Age Grammy Award winning album of the year “Prayer For Compassion.”

As an educator in the field of audio recording and music production, he has taught University courses for over ten years, written an informative primer for recording novices called “Home Studio Setup” published by Focal Press, and has provided internet based training with instructional videos through various websites and articles/content on his own website theDAWstudio.com.

Ben completed a Bachelors Degree in Music from BYU Provo in 2003 and a Masters Degree in Recording Arts from the University of Colorado Denver in 2006. He has had the privilege of being mentored by many great producers and audio engineers including chart-topping producer Ron Simpson, former AES president Roy Pritts, and Grammy Award winning Engineer Mickey Houlihan. He has in turn taught and mentored various successful audio professionals currently working in the industry from video game sound designers to Audio/Visual team leads to Emmy award winning music producers.