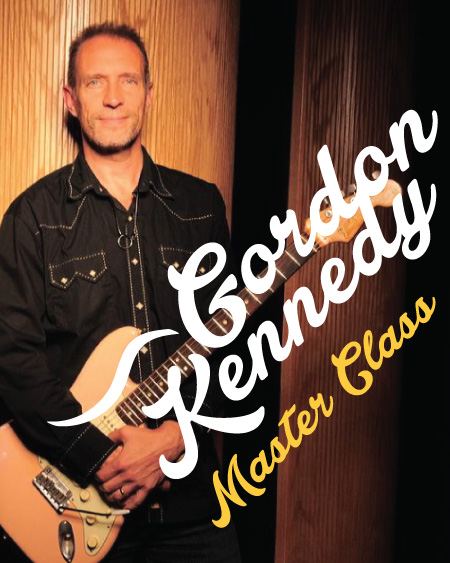 High school music teacher colleagues, if you teach songwriting, please accept this invitation for you and your students to attend the Gordon Kennedy Songwriting Workshop at Snow College.

Gordon Kennedy is a songwriter, musician, and producer based in Nashville, Tennessee best known for his work in the Christian rock band White Heart and co-writing the Eric Clapton song "Change the World", with Wayne Kirkpatrick and Tommy Sims.

Kennedy is the son of Jerry Kennedy and singer Linda Brannon. A native of Shreveport, Louisiana, Kennedy moved to Nashville in 1961, when he was still a baby and his parents were trying their hands in the music industry. His father spent 16 years running Smash Records, the country subsidiary of Mercury Records.[citation needed]

Kennedy attended Brentwood Academy where he was selected the most athletic student his final year. He completed his first master recording session after his first year of high school, lending a solo to Johnny Rodriguez' song "Run Like a Thief" and performing a twin guitar part with his father on "Remember Me".[citation needed] He then attended Belmont University where he worked playing guitar on several of Reba McEntire's projects, including her first top 5 single, "Today All Over Again" and her first No. 1, "Can't Even Get the Blues".

In 1984 Kennedy joined the contemporary Christian group White Heart when his high school friend, Dann Huff, left the group and recommended him to fill the spot. Kennedy was in the band for six years, leaving in 1990 to get off the road and pursue session work.[citation needed]

He spent the next few years establishing himself as a session guitarist, primarily for contemporary Christian artists like Amy Grant, Twila Paris, Susan Ashton, PFR and Steven Curtis Chapman. Kennedy began working with Brown Bannister and Wayne Kirkpatrick. He and Kirkpatrick started writing in pursuit of an artist deal together, and though the deal never materialized, the two wrote three songs for country megastarGarth Brooks' alter-ego album, The Life of Chris Gaines. Kennedy wrote 10 songs on that album, which reached No. 2 on the Billboard 200 chart. In 1994, Kennedy's song "That Kind of Love", picked up by the Christian group PFR, was awarded CHR Song of the Year. In 1995, Kennedy teamed up with songwriter/producer Jimmie Lee Sloas to release a project under the name Dogs of Peace, releasing Speak. "Change the World", written earlier, was first recorded in 1995 by Wynonna and later Eric Claptonthrough the release of the film, Phenomenon, in mid-1996. This version spent 81 weeks on Billboard's AC chart, 13 weeks at No. 1. It was nominated for several Grammy Awards. In 1997 Kennedy he was inducted into Louisiana's Southern Songwriters Guild Hall of Fame.

Kennedy has served on the Board of Governors for the Nashville Chapter of the National Academy of Recording Arts and Sciences (NARAS) for 10 years and currently serves on the Belmont University Advisory Board. He also gave his time on the Brentwood Academy Board of Trustees from 2006 until 2010.

Register for the Master Class

A limited number of your students will be able to perform one of their songs for Mr. Kennedy's comments.

Hurry and register- space is limited.