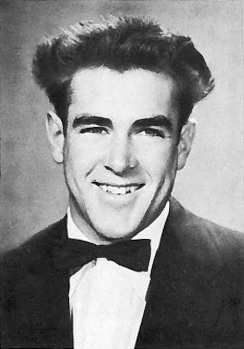 Glen Allred was an avid Badgers fan and former Snow College football player (54’). He was dedicated, loyal, and a tireless supporter of Snow College Athletics for many years in numerous capacities. For nearly 14 years, Glen announced for Badger football games and track meets during the 1970’s and 1980’s. For over 30 years he rarely missed any home athletic events. During his time as the Badger Booster Club President he called upon alumni, friends, and colleagues for donations to support Badger Athletics.

Glen’s son, Steve, fondly recalls tagging along with his dad to Snow College where he worked endlessly to not only sustain, but improve Badger Athletics. Glen’s genuine love for Badger Athletics was evident from all those who made his acquaintance, while his quiet generosity did not go unnoticed. On more than one occasion, Glen himself, purchased equipment for teams who lacked the resources. One year it was uniforms and shoes for the wresting team coached by Cleve Morgan. Another year it was uniforms for the track team. In 1988, he received the prestigious Centennial Year Distinguished Alumni Award.

Riley Jensen shined as a Snow College quarterback from 1992 to 1996 where he led his team to a 10-1 record and a 4th in the nation ranking in the fall of 1996. While leading the country in passing yardage and touchdowns, he also received 1st Team Junior College All-American (3,605 yds. Passing, 36 TD’s) and first team Junior College Academic. Following Snow, Riley played for LaVell Edwards and Norm Chow at BYU before transferring to Utah State University. Under Bob Petrino’s coaching at USU, Jensen was named 1st Team Academic All-Big West and team captain. After his playing career, Jensen took the offensive coordinator position at Snow in 1999, where his team led the country in passing and total offense. This earned Snow College a 7th in the country ranking. Jensen has shared his talents by continuing to assist quarterbacks reach their full potential both in the college level, as well as high school.

Riley earned a B.A. from Utah State University and completed his MS in Sport and Exercise Psychology at the University of Utah. He interned with Utah’s football and tennis teams, and works with Westminster Basketball, Rowmark Ski Academy, Peak Ski Academy and various individual athletes. He currently is a Sport Psychology consultant of over 27 pro, college, and high school athletes. He also works with businesses and teams to help them to reach their maximum performance.